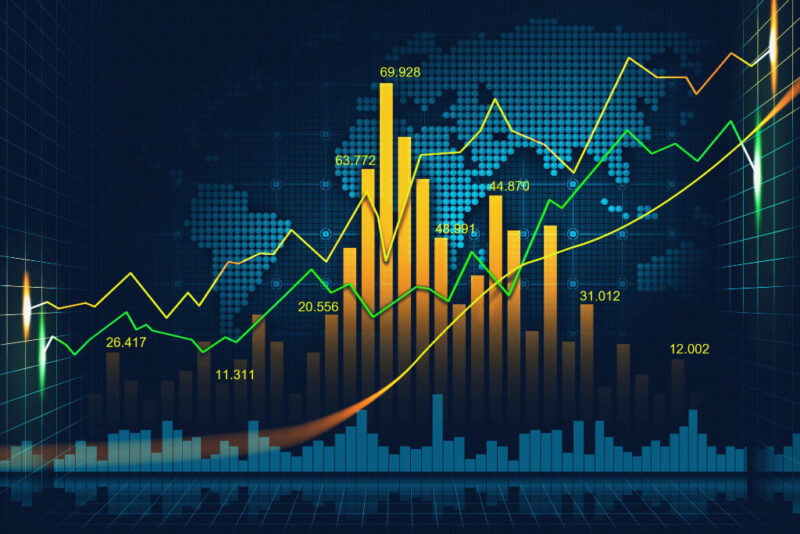 In spite of my love of all things mining and rocks, I’m convinced, indeed assured, the best indicator of economic health in a consumption-based economy is the retail sector.

Some 60.3% of the UK’s gross domestic product (GDP) comes from private consumption. Also known as consumer expenditure or personal consumption, the UK’s main source of economic growth relies on people spending money on goods and services.

That could be food, transport, insurance, meals at restaurants, financial advice, travel and clothing, for example. How much buying and selling of things tells us if the UK economy is getting bigger (expanding) or getting worse (contracting).

Whether we blame marketing departments, Wall Street or a journalist who needs a catchy headline, market commentators are always looking for a snappy take to sum up the state of the economy.

There’s a couple of well-known ones already in use. We’ve got the skyscraper index, the lipstick effect, the men’s underwear index and the hemline index.

The problem is some those past made-up measures of economic health may have outgrown their usefulness.

Ladies and gentlemen, allow me to introduce what I’m calling the “Botox Barometer”.

From underpants to lipsticks to Botox

The research tool for lazy writers, Wikipedia, tells us the phrase “skyscraper index” was introduced in 1999, and explains the theory as the world’s tallest buildings “rise on the eve of economic downtowns”.

While I would argue that the skyscraper index is really the physical evidence of a peak in lending from the banking sector, it does actually hold weight. It’s been a fairly reliable track record of preceding economic downturns all the way back to the 1800s (you can find a detailed analysis of the theory here).

Then you have the hemline index, which suggested that the rise and fall of skirt hemlines moved with stock prices. From the mid 1920s to 1960s it was fairly reliable too. However, it outlived its usefulness once it was no longer shocking for a woman to show her knees in public.

We can thank former Federal Reserve chairman Alan Greenspan for the men’s underwear index. Very seriously referred to as the “MUI”.

Greenspan was on the money. Men’s underpants sales fell during the US recession of 2007-2008. But when the US economy turned a corner, the sale of the unmentionables were strong into 2010.

Another fun one that does the rounds, is the lipstick effect, coined in 1998. Economic and sociology professor Juliet Schor observed that when the economy was in a downturn, women would forgo more expensive creams used at home and opt for “little luxuries” like lipsticks that were visible in semi-public spaces.

While true – a former chairman of Estée Lauder noticed an uptick in lipstick sales during the technology media and telecommunications (TMT or dotcom) bust (in 2000-2002) – the sales of lipsticks are highly influenced by fashion trends as well. In other words, following this old-world rule may not work in this new-world economy.

Blame it on the ladies who lunch, social media or the “carpe diem” generation (the young adults of today who would rather have things now than delay gratification), but cosmetic injectables have become extremely popular in in the last two years.

Cosmetic injectables is the name given to the group of substances that are injected into someone’s face to reduce wrinkles and lines. There are also some genuine medical applications as well, like for migraines.

A neurotoxic protein called botulinum – often called Botox, being one of the mostly known brands – is injected into muscles to stop them moving. Dermal fillers on the hand, is a gel like substance injected beneath the skin to either smooth it out, enhance facial features or soften wrinkles. While completely different chemical compositions, dermal fillers and Botox are often lumped together as one group.

For many years, these were a luxury. They were only for the wealthy or the bored or those scared of ageing. But in a post-pandemic world, cosmetic injectables are big business. The McKinsey Global Institute estimates that the cosmetic injectable business will double in size between now and 2026.

This rapid growth during a global economic slow may mean that Botox is the 2020s version of the lipstick index. I’m calling it the Botox Barometer because I love alliteration, so forgive me.

Given Botox has been around for over a decade, why now is it becoming an important economic indicator? Especially when sales dived during the 2007-2008 US recession?

Simply put, we spent too much time staring at our own faces on Zoom during lockdown and the costs of the procedures are significantly lower today. Cosmetic injectables are considered a necessity, with the Derma Institute in the UK saying:

After several months of staring at their own faces, people have started to criticise and analyse their facial features more than usual, akin to the “selfie” effect. In many parts of the world, aesthetic practitioners report a surge in the demand for cosmetic procedures post lockdown.

According to one CEO of an Australian injectable chain, his customers consider cosmetic injectables “essential” calling the injectable industry “recession-resilient”.

Zoom ready at any cost

Increasingly widespread use of cosmetic injectables has seen their costs lowered and where you get it done has changed. Injectables used to be only available at special clinics located in the city. Now, they are ubiquitous, and you can find them at studios in your local shopping centre.

For around fifty pounds, you can dash down to a Botox studio in your lunch break and be back in front of your screen within sixty minutes.

More to the point, as energy costs rise and inflation starts to bite, what people value and how they spend money has changed.

After being forced to look at our own faces now for longer than we ever have before, people prefer to be “Zoom ready” as a priority. One CEO has said most of the people who get injectables see it as an absolute necessity and will forgo travelling or a new coat so they can keep up their injectable routine.

This alteration in how we spend money is something Sam and I recently discussed in an Exponential Investor podcast episode.

Some of us were fortunate enough to build up a savings buffer as governments played open-and-shut with our economies. And because of that, what we want to spend our savings on today is different to 2019.

What this means for investors is that how to invest in a recession is different too. While pharmaceutical stocks have generally performed well when economies go through long recessions, pharmaceutical companies that manufacturer or license Botox or dermal fillers may be end up with a tail wind from these sectors.

More to the point, given that people are seeing cosmetic injectables as a must-have, there is a chance that demand for these services will survive throughout a recession. The injectables studio chains infiltrating the local shopping centres will only continue to do so if there’s money to be made.

Maybe you should keep a few of these cosmetic businesses on your watchlist, as they could be one of the few sectors of the stock market to outperform over the next few months.

PS Here in Exponential Investor we are bare-toothed stock pickers. We’re looking to snag the best stocks from the most powerful trends. We want to buy low and sell high. That’s why I was intrigued by a new strategy that came to my attention. It’s a “buy high, sell higher” trading method. Instead of taking big swings for big profits, it targets “micro-moves” over and over again. The maths behind this system has been honed for almost 20 years! And the back-testing is mightily impressive. Rather than just tell you about it all, the man behind the method is going to hold an exclusive trading demo this coming Tuesday (27 September) at 7pm. If you’re looking for an effective new trading approach, you will want to tune in. It’s free to attend and registration takes just a minute. You can do that here now.