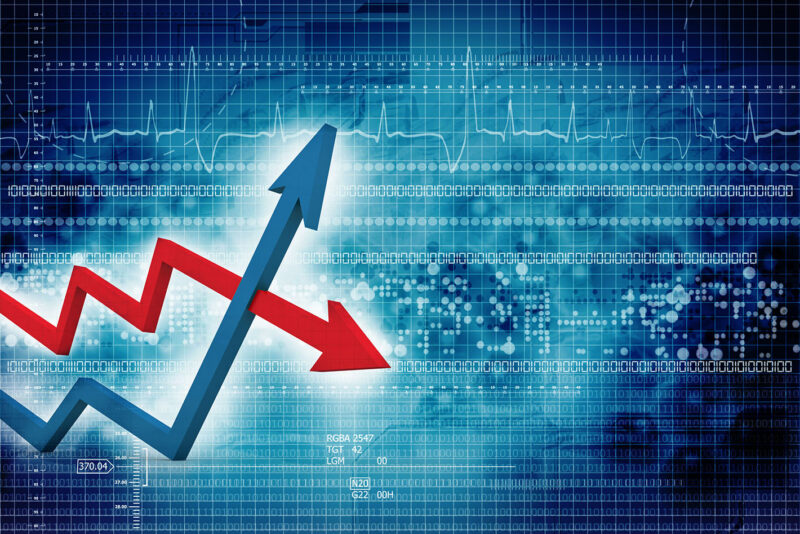 A recent edition of Exponential Investor looked at “flashing red lights” – warning signs for investors from the bond markets of the United States.

An obvious question is: what has been happening in the bond markets of the euro area? After all, they are big by any standard. There’s about €10 trillion (or, if you prefer, €10,000 billion) in euro area government bonds outstanding. Financial institutions and other non-government entities in the euro area have issued similar quantities of bonds.

Back into positive territory and rising rapidly

How to lose a bit of money by lending to Germany

As the chart shows, the yield on the 10-year German government Bund – a benchmark against which many other euro area bonds are compared – has been rising.

Currently, the yield on this important bond stands at 0.483%. Thanks, in part, to the quantitative easing (QE – the policy of creating money in order to buy bonds) of the European Central Bank (ECB), the yield fell into negative territory at the end of April 2019. The yield rose back through 0% at the beginning of February this year.

As it happens, the benchmark 10-year Bund provides free money for the government of Germany. Currently, the bond in question has a maturity date of 15 February 2032 and a coupon interest rate of 0%.

A rise in the market yield on this bond of around 0.50% in the space of about nine weeks may not sound like much. However, it means that the price of the bond – and therefore the value of any investment in it – will have dropped by about 5%.

Any move in bond yields will not hit all bond investors equally. Bond market analysts often talk about a bond’s duration. This is the sensitivity of the price of the bond to a given change in market yields. The longer the duration, the bigger the impact of any given change in the market yield of the bond. For the benchmark German Bund described above, there are no interest payments (or coupons) – so the duration is the same as the maturity at 10 years.

… what happens when the duration is about 100 years?

How to lose a lot of money by lending to Austria

In a recent edition of The Fleet Street Letter Wealth Builder, another Southbank Investment Research publication, my colleague Charlie Morris considered what has been happening with the Republic of Austria’s 2.1% bond which matures on 20 September 2117.

In 2017, yields on long-term euro area government bonds were very low. Austria’s government wanted to take advantage of this.

By issuing a bond that doesn’t mature until 2117, the government further reduced the overall risk of its balance sheet.

From the point of view of Austria’s government, issuing the bond was a very smart move.

From the point of view of investors, buying and/or holding the bond was also a very smart move – but only up to the last quarter of 2020.

Since that time – or over about 15 months – the price has dropped to €121 today. Anyone who invested at the peak now faces a paper loss of 47%.

As recently as the beginning of July 2021, the price was €188. The value of the bond has fallen by over one third since then.

Remember that this bond is generally regarded as being a very safe investment. Bond analysts and ratings agencies have a very high degree of certainty that Austria’s government will make all the interest payments and repay the principal of €100 when the bond matures in late 2117. As Trading Economics notes:

Of course, not all national governments in the euro area are so highly regarded.

Along with Germany, France, the Netherlands, Finland and several other countries, Austria is seen as being a part of the “core” of the euro area. The “core” countries have generally had governments with balanced budgets, high savings rates, well capitalised banks, low inflation and (prior to Economic and Monetary Union in Europe in the 1990s) strong currencies.

The “peripheral” countries of the euro area, by contrast, have traditionally had high inflation, over-extended banks, large budget deficits or big current account deficits or a combination of these problems.

The “peripheral” countries include Portugal, Italy, Ireland, Greece and Spain. They were central to the economic and financial crisis in the euro area which came to a head on 26 July 2012, when then ECB president Mario Draghi said that that institution would “do whatever it takes to preserve the euro”.

How to spot future losses from lending to Greece

Because the governments of the “peripheral” countries were, and are, seen as being riskier (in financial terms) than those of the “core” countries, their government bonds normally trade(d) on higher yields – and lower prices – than comparable bonds from “core” countries.

The difference between the yield on, say, a 10-year bond issued by one of these governments and the yield on a 10-year German Bund is called the spread.

If the spread gets larger (or widens), it means that analysts and investors perceive that the risks of a default (a situation where the government in question fails to make a regular interest payment and/or to repay the principal) are going up.

On the other hand, if the spread gets smaller (or narrows) that means that the perceived risks are going down.

Consider what happened to the spread on 10-year Greek government bonds. At the beginning of May 2012, about three months prior to Mr Draghi’s famous speech, the spread was 2,795 basis points.

A basis point is one hundredth of a percentage point: the apparent risks of lending to the Greek government at that time were so great that investors required almost 28% extra yield relative to the then prevailing yield on German Bunds.

Now, the spread stands at 239 basis points. In less than a year, the risk premium in terms of yield that investors require from the Greek government has gone up by an entire percentage point.

The recent edition of Exponential Investor, which looked at the US bond markets, identified a number of “red lights” – or very clear signs of imminent problems for the US (and global) economy and financial markets.

Right at the moment, the red lights are far less obvious in bond markets of the euro area. However, it is possible to identify where the metaphorical lights could flash amber at any time:

PS: Yesterday some of you wrote in to say you had difficulty loading my conversation with Shae Russell. It appears that the blip wasn’t actually on our side but rather a caching/cookie issue with certain web browsers such as Google Chrome. Obviously we apologise for any inconvenience caused and, if you missed it, here is a direct link to the interview on YouTube:

For further info on how to solve any videos not playing in Google Chrome you can follow this link here. Apologies again and we hope you enjoy the video.