From high prices to a shortage 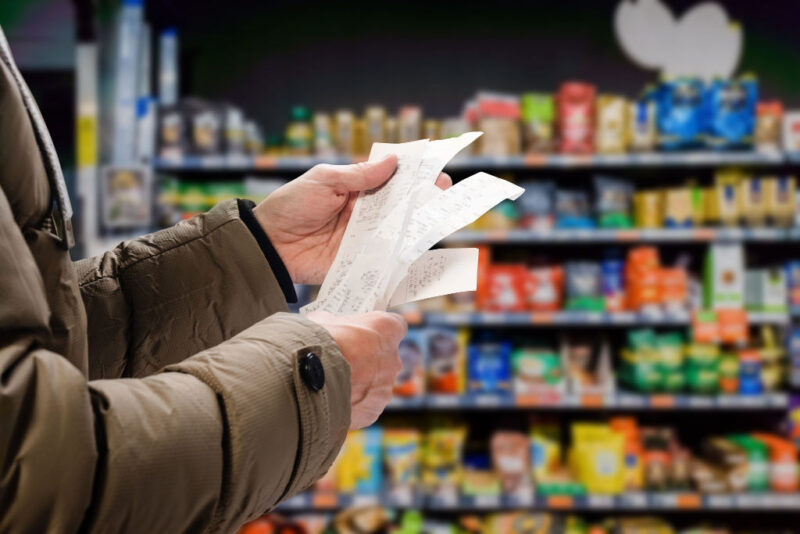 It’s hard to picture how food could cost more.

I’m shocked at how much less my grocery budget buys me each week.

A midweek top-up – for simple things such as milk, bread, cheese and maybe a cheeky block of chocolate for family movie night – now sets me back twice what it cost this time last year.

I’m not alone, either. The Guardian recently noted that the average price of a weekly shop in the UK rose 11.6% in the four weeks to 7 August. That’s a double-digit gain in a month!

Then, of course, there’s the dreaded invisible inflation. Where pre-packaged food costs the same, but the package is mysteriously smaller than you remember…

To boot, the cost-of-living crisis means fewer people are donating to food banks. While financially secure people are at risk of having less choice… people within a whisker of the poverty line will be facing hunger on a regular basis.

Thanks to a combination of Brexit, extreme weather impacting growing conditions in Europe, and the war between Russia and Ukraine – two of the northern hemisphere’s farming powerhouses – not only will we see persistent high food prices, but food scarcity as well.

This is a supply problem

The Bank of England (BoE) will get together next Thursday and almost all economists agree that interest rates are going up. Some say by 0.25%. The majority say by 0.50%.

Either way, by the end of September we have a cash rate at, or above, 2% again. A rate, I might add, the UK hasn’t seen since December 2008. That’s 14 years since the cash rate has been close to normal monetary policy…

For all you historophiles out there, the BoE’s average interest rate over the past 328 years is 4.66%.

The central bank still has several leaps before it gets close to the long-term historical average. But a 0.25 or 0.50% rate hike will not make a difference to the inflation gripping the UK.

As I wrote last week, jacking up the rates won’t end the inflation paralysing the country.

Don’t get me wrong, central banks absolutely must raise the cash rate from the (decade-long) emergency levels. But doing so may eventually make things worse… though that’s a topic for another day.

You see, the inflation that most of the UK is experiencing now is largely out of the hands of central banks. It’s a supply-side problem, not a monetary one. If you don’t extract it or grow it locally, you are a price-taker.

No amount of feigned concern from our central-banking overlords will bring down the cost of petrol or food.

Sure, petrol prices have eased, and they are nearing their pre-Russian invasion prices. But falling prices at the pump doesn’t mean our inflationary woes are over.

This is why petrol prices are such a topical issue. There’s no escaping this form of energy. Unlike your electricity or gas bill, your petrol costs are weekly, not monthly, or even quarterly.

Meaning your memory is fresh, and high fuel prices have an immediate impact on you. Whereas with gas or electric bills the impact is delayed.

The delayed impact of rising prices also tends to be more pronounced with your weekly grocery shop.

Higher costs here are incremental. They creep up bit by bit until suddenly there’s not much change left from fifty quid.

Food prices in the UK have been rising at a significant rate since 2021… but have only become a key part of the cost-of-living crisis from this year.

The thing is, this straight line higher for food prices isn’t about to retreat.

If anything, food prices are about to increase even further…

Though we all winced as petrol prices exploded, the impact of the Russian-Ukraine war on food supply and prices hasn’t really been felt dramatically for a wealthy country like the UK.

The input prices for one the basics of our diet can take 6-12 months to filter through to consumers.

Rather, we’re about to find out what happens to us when a major industrialised country that feeds many pockets of the world loses significant farmland… with a disrupted planting season… and has reduced the amount of its fertiliser.

Yes, some 20 million tonnes of grain trapped in Ukraine ports for the past six months have started to leave via the Black Sea. Even though wheat prices begun to retreat on this news, there is no way things are normalising.

For starters, grain was kept in portside silos for many months longer than it normally is, with no indication that it has even been stored correctly. We are yet to find out if it’s suitable for human consumption or animal feed, or is now just rotting.

Farmers have had less cash, fewer resources, and have used less fertiliser. These three factors are a triple threat when it comes to grain supply.

So much so that the coming winter crop – planted at the end of summer, harvested in winter 2023 – will only use two-thirds of the area normally planted. As a result, McKinsey estimates the 2022-23 harvest could be lower by 35-45% for the year.

Today’s high prices are rapidly running into tomorrow’s scarcity. The global food chains are delicate and, like a clock, they require synchronicity among all parts in order to operate.

Sure, once the price of a commodity has eased, it costs a little less to get from A to B. The problem is that the cost of another continues to rise slowly and the situation will only get worse because there is no end in sight to supply disruptions.

Petrol and food are the two most visible examples. But are other things will impact the cost of living, you just can’t see them.

On Thursday, I’ll go over two more things that are going to keep inflation – and frankly, this is just the first wave – at cripplingly higher levels.