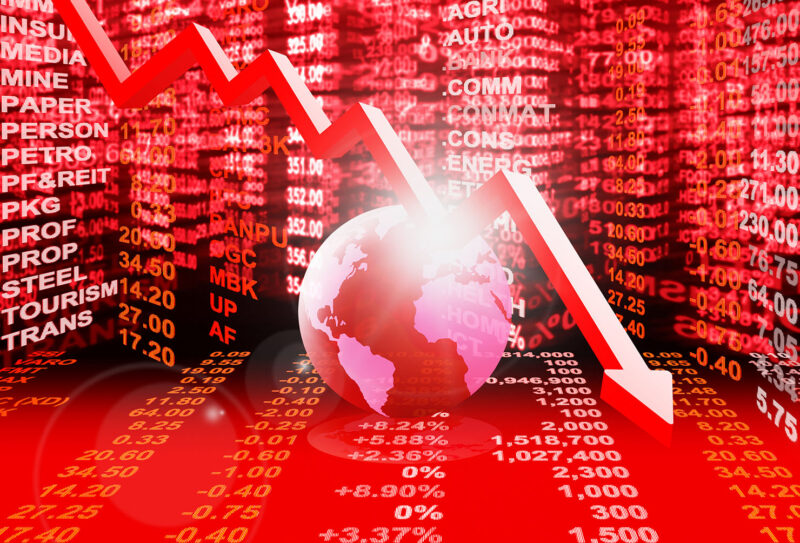 Imagine on this day a year ago, you invested in a special kind of stock.

Let’s say you invested £31,460, or you “YOLOd” (you only live once) with your entire annual income (that figure is estimated as the median yearly earnings for a full-time UK employee).

In other words, you are solely dependent on Inflation Plc performing well to deliver some tasty profits.

A year later though, Inflation Plc has not performed as you’d hoped.

Instead of growing and making your money worth more, the investment is now worth less.

OK, you’re not perturbed. You think that things will get better, so you keep your money in the system: Inflation Plc might eventually come good, after all.

Except that it then loses another 5% the following year.

Clearly you see what’s going on here. The idea of cash as safe and stable isn’t exactly true. When inflation is out of control and heading higher, you are losing money hand over fist if you’re holding on to cash.

Cash is not king as some would have you believe. Cash is a route to poverty.

The UK’s central bankers know this. But they don’t care about you.

The current inflation level of 3.1% is well above the Bank of England’s 2% target.

Central banks are here to provide monetary stability to their citizens. Or so they usually say. They know that the more money they create, the greater is the likelihood of inflation.

Of course, the Bank of England – like all central banks – does have tools with which to control inflation.

Take, for instance, the official interest rate that is set by the central bank (i.e. Bank Rate in the UK). A higher rate should encourage (or cause) commercial banks to increase rates that are offered to savers and borrowers. The incentive to save is increased, as is the cost of borrowing: this should put the brake on economic growth.

With inflation running hot, many commentators expected that the Bank of England’s Monetary Policy Committee (MPC) would increase Bank Rate. Instead, the rate remained unchanged.

As Exponential Investor noted on Thursday, Consumer Price Index (CPI) inflation in the UK is expected to rise from just under 4% in the year to October to 4.5% in the 12 months to November, and to remain at that level through the winter.

The MPC anticipates that CPI inflation will peak at about 5% in April next year – or at a level that is “materially higher” than had been expected in August.

Inflation should be just above the 2% target in two years’ time and just below the target in three years’ time – at the end of the MPC’s forecast period.

For the purpose of this edition of Exponential Investor, I’d highlight three things.

So, where should you invest in order to ensure that inflation does not make you poorer?

Well, cryptocurrencies are one possibility.

As we have seen in previous editions of Exponential Investor, even the largest, traditional finance (tradFi) based conglomerates such as MasterCard are becoming involved in the crypto world.

Bitcoin’s price is currently flirting with all-time highs ($68,521.20) at the time of writing.

Further gains may come as investors realise what are the opportunities from the Taproot upgrade of bitcoin’s network over the weekend.

The upgrade will likely improve the efficiency, privacy and smart contract capabilities on the bitcoin network, transforming it for the better.

Stocks that currently (or potentially) pay dividends and whose fortunes are not closely linked to those of the UK economy are another (and, relative to crypto, at least) far less volatile option.

As pointed out by recent editions of Exponential Investor – and other Southbank Investment Research publications – which have discussed the COP26 conference in Glasgow, such stocks include many companies that are, in some way, involved with green energy.

Optimism about the implications of COP26 and the new infrastructure bill in the United States could explain the jump in the price of iShares Global Clean Energy exchange-traded fund (ETF) This fund tracks the performance of 100 leading clean energy-related companies: its price rose almost 20% between 1 October and 1 November 2021.

Another is opportunity is “hard” assets which have a solid track record of maintaining their real value at times of high inflation. These assets include gold and other precious metals. They also include many types of property investments. Some base metals and other commodities also have the scope to perform well in an environment of inflation and (often) patchy economic growth.

Other alternatives are, well, the alternatives. These are things like collectables, fine art, fine wine and other things that are rare and – to connoisseurs, at least – very valuable. Perhaps non-fungible tokens (NFTs) – a corner of the crypto world which has seen an extraordinary boom in the recent past – should be included in this group.