3 reasons why solar panels are a good investment 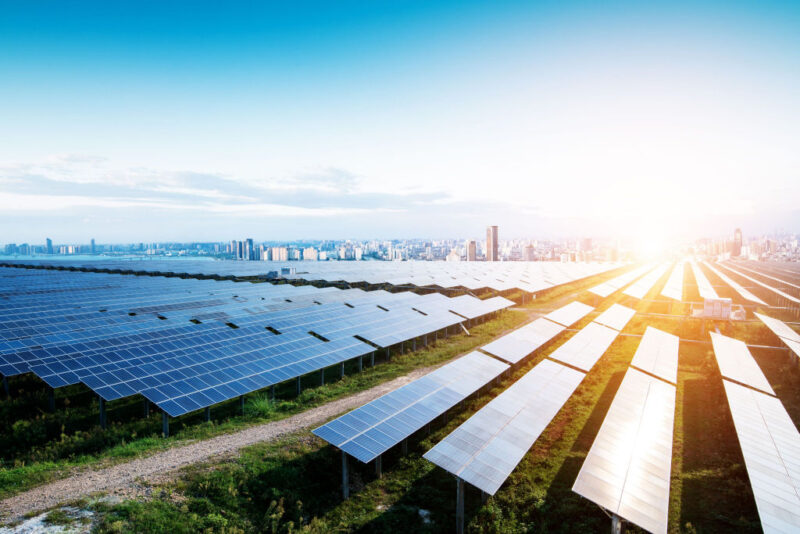 Humanity faces a climate crisis, which is already aggressively present in our lives, through heatwaves, droughts, floods and more.

Everyone has too much going on in their own lives to make huge, life-changing sacrifices for something as distant and abstract as “the climate”. Forcing people not to fly, eat beef, own a car or heat and light their homes will probably never work.

Luckily, we won’t have to try because technology has come through for us, delivering solutions which are cheaper, cleaner, and better than what came before.

And solar panels are perhaps the best of the lot.

How do solar panels work?

Solar panels are made up of many smaller units called “photovoltaic cells”. Many of these cells linked together make up a solar panel.

A solar panel works by allowing photons, or particles of light, to knock electrons free from atoms in the cell. This generates a flow of electricity.

Photovoltaic cells are sandwiched between layers of semi-conducting materials such as silicon. Each layer reacts differently when hit by photons, creating an electric field. This creates the current needed to produce electricity.

Solar panels generate a direct current of electricity (DC). Inverters are used in the panel to convert this into an alternating current (AC), which can be used by home or business consumers, or fed into the national grid.

Many cells make a panel, and multiple panels can be placed on a home’s or business’ roof, possibly linked to the power requirements of that building.

Or, they can be arranged in row upon row, forming huge solar farms. These utility scale farms generate hundreds of megawatts (MWs) of electricity, usually for the national grid.

Why solar panels are a good investment

Emissions can be either reduced, or replaced. Solar power helps to replace coal or gas-fired power. Replacing coal is especially important, as it is so carbon intensive (twice more than natural gas).

With the global population rising, and developing nations starting to catch up with Western consumption and emissions levels, it’s an enormous challenge to reduce global emissions even as economic activity keeps rising.

With solar, we can meet the needs of a growing and developing global population with lower carbon emissions.

Many countries across the world have shown that it is possible to continue growing economically, while simultaneously reducing emissions. The UK is a prime example of this.

The carbon savings are huge. I mentioned that coal is twice as bad as gas. Consider the hard numbers.

Many coal power plants produce over 1,000 grams of carbon dioxide (or equivalent greenhouse gases) per kilowatt hour of power produced (CO2 eq/kWh). Even the “cleanest” coal power is generally above 700g CO2 eq/kWh. Natural gas generation has a lower emissions intensity. But still plenty, with emissions above 400g CO2 eq/kWh.

By these estimates, this makes it at least ten times better than gas, and up to 50 times less carbon intense than coal powered generation – a truly massive saving for the planet.

And don’t forget, with electric cars, bikes and buses taking off, solar is also helping to lower the carbon intensity of the transport sector too.

But it isn’t only emissions where solar power offers great savings. It’s cheaper too…

Because there is no input fuel cost – sunlight is free, unlike coal and gas – once the solar panels are built and set up, they are basically free to run (with only occasional repairs and parts needed over their 25+ year lifecycle).

This is massive. For example, while gas prices have seen fluctuating price increases of more than tenfold in the UK and Europe in 2022, the price of generating power with solar panels hasn’t changed at all.

In fact, according to research by Ember, solar panels helped Europeans avoid potential costs of €29 billion in gas imports this summer alone.

And solar has been getting cheaper, having fallen in cost by 89% in just the last decade alone according to a 2021 study. That’s because it is a growing technology: as the industry grows, it gets more efficient, and does things at larger scale which also helps costs fall.

In fact, according to the International Energy Agency (IEA) solar power is now the cheapest form of power ever sold.

So while fossil fuels are spiking, the costs of solar power have plummeted.

Finally, solar panels are a very local source of electricity.

They can be as local as the roof of your home in fact. Or, they can be installed in any country on the planet – giving every nation the chance to improve their energy security. Given Russia’s deplorable invasion of Ukraine, and the knock-on effect on UK and European energy markets, energy security is now a top priority for all governments.

And it’s clear – we cannot rely on fossil fuel suppliers like Russia. We need to look after ourselves, and building solar farms in our own country will help to achieve this.

People often think solar panels are unreliable because the sun doesn’t always shine. But this intermittency can be managed and compensated for. But from an energy security perspective, there is only one reliable source of power at the moment – and it isn’t fossil fuels.

What are the risks of solar panels?

The key thing holding solar back is the aforementioned intermittency. The sun doesn’t always shine. Luckily, it does shine at different times to when the wind is blowing, so solar and wind can work in tandem quite nicely. It can also be managed very effectively alongside other forms of generation like hydro and nuclear power, as well as battery storage.

An increasing number of studies have shown how national grids could be run entirely on renewable sources of power like solar by or before 2050.

There are also some material constraints. Silicon is a key metal in solar panels, and is mainly produced in China.

Not only is China’s grid quite coal intensive, making the silicon manufacturing process quite carbon intensive, but there is also a political risk that it could, like Russia has with fossil fuels, restrict supplies of this key material to the West if tensions escalate.

How to invest in solar panels?

There are a number of ways to invest in solar panels.

Obviously, you can buy them for your home, which has a very direct positive impact. Right now would also be a great time: with gas prices so high, the investment would pay off very quickly.

But the focus today is more on investing in solar stocks.

The value chain for solar panels is wide and varied. It includes:

So, are solar panels worth investing in?

The answer is clear: definitely yes.

Solar panels are gaining popularity at an increasing pace. Their cost declines over the past decade or two have been nothing short of extraordinary, making them economically preferable to all other forms of power generation.

They also help countries to improve their energy security.

But the main reason is that they are one of the best weapons we have in the fight against climate change, with the potential to replace huge amounts of our annual emissions.

All investors should be learning about this incredible space, as solar panels are a great investment.

Renewable energy is something we talk about in our free newsletter, Exponential Investor, alongside the latest updates of the stock and crypto market.

If you’re not already subscribed, you can do so by entering your email address in the sidebar at the top of the page and clicking subscribe now!