Why British investors should own more gold than anyone right now

Thanks for the feedback on the last two days’ worth of gold commentary. If you missed it, check out Monday’s detailed explanation of the extraordinary turmoil in the gold market. It’s received quite a response.

Today, we get some context for British gold investors specifically. And I’ll reveal why we should own more gold than other investors around the world.

It’ll be the third time I’ve covered the gold quadrants in Exponential Investor since 2017. But figuring out which of the four quadrants we’re in is crucial to deciding whether or not you should invest in gold right now. It also highlights how favourable gold is for investors who use British pounds.

First up, a reminder on what the gold quadrants are…

The Gold Quadrants are the four possible outcomes when you invest in gold as a British investor. The global gold price in US dollars can go up or down. And the exchange rate to pounds, which gives you the pound gold price, can go up or down too.

Say the gold price in US dollars goes up 5% and the pound goes up 5% too. That leaves the UK gold price with no change. That’s because the gains in gold are cancelled out by the lower amount of pounds you get for your US dollars.

It shows all four possible outcomes for British investors. What I call “the four quadrants”.

The thing to understand is that these four quadrants are not equally likely to occur. Each one has a particular set of scenarios which will bring it about. Different combinations of money printing, GDP growth, inflation and everything else that can affect both the exchange rate and the gold price.

Gold and the pound tend to move together or in opposite directions depending on the environment we’re experiencing.

During a financial crisis, the US dollar surges against just about all currencies. That means a weaker pound against the dollar.

Gold is a safe haven. It spikes when risks in the economy rise like in 2008. It also rises when there’s inflation and money printing.

This combination makes gold a brilliant investment for Brits because the currency move supercharges the gains from gold during a crisis – just when you want gold to perform. As Quadrant 2 explains above, you profit from the gold price and the exchange rate.

Compare this to what happens to an American gold investor in a crisis. Their dollar currency is a safe haven. The US dollar surges alongside the gold price during a crisis. This decreases the benefit of owning gold, as it cancels out some of the gains.

Usually, gold surges faster than the US dollar, making gold a good crisis hedge for Americans too. But far less beneficial than for Brits.

It’s not all good news

Now let’s take a look at the sort of environment that gives you the other three quadrants. These are less important to gold investors, as it’s during a crisis that gold really shines. But they’re still important as crises only come along every so often.

Quadrant 3 is the only quadrant where you definitely lose money. The gold price moves against you, as does the exchange rate. But the environment which would make this happen is not very likely to occur for long periods of time.

The pound would have to rally while the gold price falls. This implies deflation during a “risk on” investment cycle. That probably hasn’t happened for a sustained period since the Industrial Revolution, when prices fell while British industry boomed.

The gold price is heavily influenced by inflation over time, which tends to go along with economic growth. And economic growth tends to be spurred by a falling pound, that’s why central banks try to keep it low.

To be clear though, such a move could happen in the short term, as both gold and exchange rates are volatile.

Quadrant 1 and 4 don’t offer a clear outcome. Your gains in the currency will offset your losses in gold, or vice versa. You might lose or make money as gold or the exchange rate outpace each other.

The point is that your investment is naturally held stable by the different directions of the pound and gold. Your gold investment experiences less price volatility than an American’s. That’s great for a safe haven which is waiting for a crisis to show its metal.

The proof is in the pudding…

Take a look at the charts below. The gold price in US dollars has tumbled since 2013 while the fall in the pound allowed the UK gold price to recover since 2016: 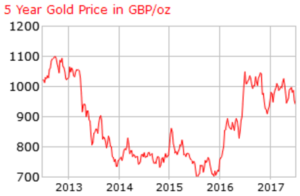 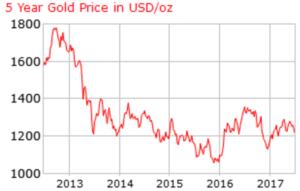 This is an example of currency moves holding your gold steady in pounds – Quadrant 4. It’s not a bad result. But the real focus remains the supercharged gains during a crisis.

Which quadrant are we in now?

All of the above came from my article back in 2017, as you might’ve guessed from the charts. Since then, the gold price has surged, especially in pounds. 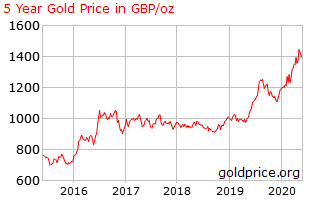 But which quadrant does that mean we’re in?

A falling pound and a rising gold price is Quadrant 2 – the best possible quadrant for UK gold investors. It describes a crisis that pushed up gold because of its comparative safety, and pushes down the pound because it is a “risk on” currency.

The question is whether this recently changed. The gold price has been trundling along sideways since mid-April. Only the pound’s weakness turned this into gains for UK investors.

If the crisis is over, what sort of quadrant will we move to?

Well, the pound may rally. But it’s unlikely the gold price will fall. Because the only thing keeping financial assets afloat right now is vast economic stimulus in the form of money printing, debt and spending. That’s bullish for the gold price.

Then there are Brexit risks, which could sink the pound in coming months.

If you ask me, we’ll be back to Quadrant 2 in coming months – a rising gold price and a falling pound.

This makes gold an excellent bet for British investors right now. Especially as a hedge for the rest of your portfolio.

I believe we British investors should hold more gold-related investments than other investors around the world at all times. But, right now, it’s the right time to buy.

But which gold investments?
If you’re a gold sceptic who is just beginning to appreciate the power of gold for your investment portfolio, I urge you to check out this play on the gold price.

It’s all about a way to turn gold’s boom into an income source for you – something many gold sceptics avoid gold for.