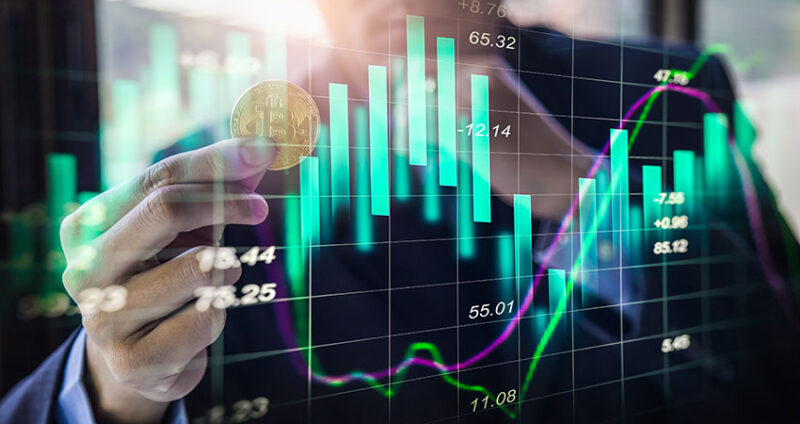 The very title of this e-newsletter, Exponential Investor, implies that we will quite often focus on something whose growth is, well, exponential.

And, if it hasn’t done so already, that something that we have in mind today will have an impact on your everyday life, as we explain below.

What we are talking about is decentralised finance (DeFi).

DeFi is that part of the world of financial services where the networks which connect participants are decentralised. Each network is controlled through a number of different, equally powerful, nodes. There is no one single administrator or controller that is in charge.

Each of these networks is underpinned by blockchain technology. Transactions that take place on a blockchain are recorded in a file called a “block”. Every transaction which takes place in the network has to be approved by all the nodes within the network. Once approved, the block is closed, added to a timestamped list (the chain), and a new block is opened.

The chain cannot be altered afterwards – this adds to the security. The entire network is very secure from hacking because it is decentralised, so it is not possible for bad actors to damage the network from outside.

Exponential growth in practice: from $1 billion to $274 billion in just a year-and-a-half

A metric that is often used to quantify the size of the DeFi world is total value locked (TVL). A good definition of TVL comes from Nasdaq, a US stock exchange in which technology stocks feature prominently.

It’s very simple. Let’s say an investor connects their wallet to a DeFi platform and deposits $1,000 worth of crypto into a money pool to validate transactions on its native blockchain (staking) and receive rewards. Next, [he/she] lends out an additional $1,000 in crypto for interest on the same platform. afterwards, [he/she] deposits $1,000 worth of coins in a money pool to provide trading liquidity for swapping between obscure altcoins and [he/she] earns trading commissions. If this were the only business the hypothetical DeFi platform was getting, then its TVL would be $3,000. That’s all there is to it.

For our purposes, what really matters is how much DeFi has grown in an extraordinarily short period of time.

According to market data company Statista, the TVL of the DeFi world was just $1 billion in May 2020.

By November 2021, the TVL of the DeFi world had rocketed to $274 billion. Some 70% of these assets were secured on the Ethereum blockchain.

The DeFi world has appeared – essentially from nowhere – in the space of just 18 months.

Within the DeFi world, blockchain technology underpins non-fungible tokens (NFTs). These are cryptographically secured digital assets which are unique and which cannot be replicated. Interest in NFTs exploded over the course of 2021: currently their TVL is estimated at about $7 billion.

People are already using DeFi and blockchain to trade real estate: you could be next…

Now, imagine if every home and commercial building in the UK were matched by a NFT that included all the data that a potential buyer would want to know: its place in the land register; who owns (or had previously owned it); its energy rating, and so on.

In a recent special report, “The new money secret hidden in Sotheby’s vaults…”, Southbank Investment Research’s Sam Volkering considers what could happen to the UK’s £7.5 trillion residential real estate market in the event that all properties were backed by NFTs. There would, for instance, be no (or much less) need for real estate agents and conveyancing lawyers. Buying and selling houses would become vastly simpler and less time-consuming than is the case today. The entire market would become a part of the DeFi world.

As Sam points out, this is not far-fetched. One real estate agent in California is already selling property by using a blockchain-backed NFT. In 2017, TechCrunch editor Michael Arrington did something similar in the world’s first real estate auction that was facilitated with blockchain.

“I am excited about how NFTs in the virtual world are going to be applied to real estate in the physical world. I suspect that people will soon be able to buy a building, buy the air rights and buy the virtual rights of any physical space. The future is awesome.”

Blockchain-based NFTs make a transaction secure and paperless. Globally, all investible assets (real estate, stocks, bonds, and so on) are worth around $400 trillion. Many of the world’s leading global banks – such as Goldman Sachs, JP Morgan and Citigroup – are investing heavily in blockchain technology.

These organisations are not alone. As Sam notes, pharmaceuticals giants Pfizer, Gilead, Genentech and McKesson are all a part of something called the MediLedger Network. The Network is looking at ways of using blockchain to control what goes into drugs and where those drugs end up. This is in the context of a world where about $1 billion worth of pharmaceuticals go missing each year and in which the World Health Organisation reckons that one in ten medical products (including pills and vaccines) are substandard.

In a completely different industry – defence/aerospace – Boeing sells over $1 billion in aircraft components annually through a blockchain-based platform. In this way, the buyers know exactly where each component has come from and are secure in the knowledge that that component has not been tampered with.

The race to exploit the $867 trillion opportunity

As the title of this edition of Exponential Investor suggests, blockchain is what makes the transacting of real estate faster, easier and – above all – safer. Obviously, the applications outside real estate markets are huge as well.

Blockchain has been “under the hammer” in another sense. As we have seen, the growth of DeFi has been exponential. It is a very safe bet that the phenomenal growth of DeFi and blockchain will continue, if not necessarily at quite the same rate.

A mid-2021 report from the World Economic Forum (the thinktank which – among much else – hosts annual summit meetings in Davos, Switzerland), suggests that blockchain-based technology could have an impact on markets worth up to $867 trillion. That report suggests that “the race is on for enterprises to develop risk-adjusted integration strategies and capitalize on the rapidly emerging blockchain economy”.

Other researchers have presented similar findings.

Gartner noted that 11% of enterprises surveyed are already using blockchain in their operations. Meanwhile, 75% are actively looking at how they could do so.

Blockdata reckons that over half of the world’s largest 100 banks by assets under management (AUM) have exposures of some kind to blockchain and cryptocurrencies. Deloitte’s Global Blockchain Survey discovered that 76% of respondents expected that digital assets would represent a strong alternative to (or replacement for) conventional (fiat) currencies in the next five to ten years.

PS At a time that businesses are set to ensure that the exponential growth of blockchain continues, the mainstream and financial media is focusing on the latest correction to the price of bitcoin. Naturally, there is a lot more to cryptocurrencies than just bitcoin. In fact, Sam Volkering has pinpointed three little-known cryptocurrencies, one of which he believes could turn every £1,000 into as much as £242,000. He’ll be revealing details at his free Thursday event, “The Bitcoin Bounce-Back Event” – and until then, you can sign up for his free briefing in seconds here.